A mural in Odell stretching 200 feet tells local history that spans 200 years. Against an industrial backdrop, the colorful mural is a vivid thank you to the fruit workers of the Hood River Valley, says Maija Yasui, the area’s longtime historian and project organizer. “The mural honors the migrant workers who are the backbone of our fruit industry,” says Maija, whose family has owned and operated orchards for several generations. “This is a way to say ’You are an important part of this community.’” 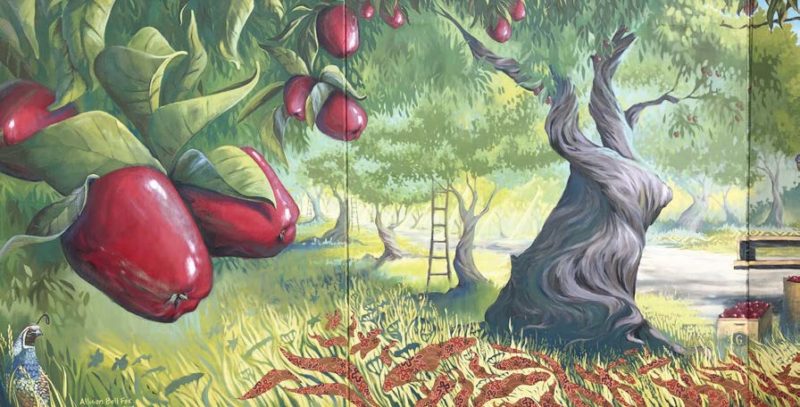 In a series of three panels, each measuring 16-feet-by-64-feet, the mural stretches across the west side of the Diamond Fruit Growers warehouse facing Odell Highway. Viewing from north to south, each panel illustrates the evolution of the fruit industry.

The first panel depicts the arrival of Europeans in the 1900s as they established apple orchards. The mural illustrates the harvest of towering apple trees, ladder scaffolding and horse- drawn wagons for delivery of the apples from orchard to packing house to rail station. Apples were the area’s most popular fruit in the late 1800s and helped establish the Hood River Valley as the premier fruit growing area on the West Coast. However, a few harsh winters and the rush for apples was soon replaced with pears, which could survive better in winter. 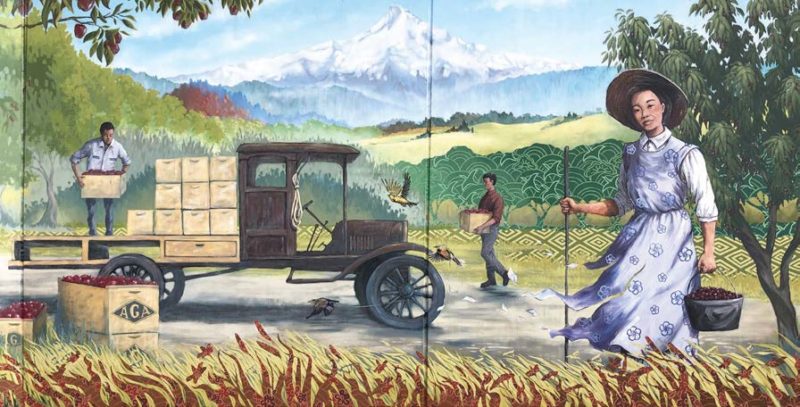 The second panel shows the transition from the 1920s to 1960s when apple trees were replaced by pears and cherries, and the rise of Japanese immigrants working as farm laborers, before and after the government seizure of land, rights and internment during World War II.

The third panel features the valley’s bounty of pears for which the area is now known. This section features Latino farmworkers and owners who have been the backbone of the industry for the last 40 years—including a large portrait of Guadalupe Balderrama, 82, who works as foreman at the Yasui farm.

“It’s meant to highlight the industry’s success in diversifying its products as conditions change, and to celebrate the diverse workforce that has made our community such a great place to live,” Maija says. “The strength of the fruit industry today, although initially founded on the backs of immigrants in a valley where discrimination was rampant, has transitioned to one that has helped farmworker and farm owner thrive by understanding the value of diversity.”

Initiated by Maija and friend and colleague Patrick Rawson, the massive art project began nearly two years ago when the two were searching for a way to celebrate the fruit industry while also addressing what they experienced as a rise in fear and racial intimidation.

Maija has worked for decades as a community organizer, writing grants and bringing people together to tackle issues impacting the community including education, child care, poverty, drug abuse and hunger. The daughter of Finnish parents who immigrated to Hood River Valley, she is married to Flip Yasui, a Japanese man whose family survived internment and loss of land.

In the past three years, that philosophy has been challenged as she noticed an uncomfortable change. In Odell, where 68% of the population is Latino, she began to see immigration status questioned and insults hurled.

“All the work this community has done collectively since 1990 to be a welcome community for all, 30 years of work—to see it erode so fast was crushing,” she says.

Maija and Patrick looked for a way to slow the unraveling and help make Odell open and welcome again. Looking at a town of fruit packing factories, Maija said, “There are a lot of blank canvasses here.”

A mural was born. The project involved local artists Allison Bell and Michelle Yamamoto who, in partnership with Arts in Education of the Gorge, created sketches from historical photos. Last summer the refined drawings were enlarged and projected onto the warehouse “canvas” and painted by Allison and Michelle.

“I felt like we are giving the community a big hug with this mural,” says Michelle, who lives in Hood River.

Like the people she painted, her own father experienced the tragedy of internment.

“It was an honor to use art to convey my gratitude to all of those who came on treacherous journeys from their homelands to simply seek a safer and happier life here in the Hood River Valley over the past 100 years,” she says.

More than $20,000 has been raised to produce the mural, all from individual donations and local business contributions. Diamond Fruit Growers provided space for the mural, but the project is not funded by the company.

With the mural complete, the project continues. Phase two includes a viewing kiosk with portraits and stories of Hood River Valley orchardists and immigrants instrumental in developing the industry. Fundraising is underway.
“This is a way to restore and uplift the community,” Maija says. “This is our ‘I love you’ card to the community that’s made it.”